Well, a few days ago, Jimmy Wales insisted in an imediaconnection article (Jimmy Wales: Why the recession won’t kill digital media) that they were moving full steam ahead on Wikia Search

“I have my team focused on the front end, working on the user experience, and making sure we have all the wiki-like tools people need to work on the site. We’re just cranking away.”

OK, so that wasn’t quite true.

Moving to Rafe Needleman’s CNet account Wales giving up on Wikia Search. Jimmy is quoted with:

“It was going to take at least a another year to two before it’s usable by the public, and we can’t afford that right now.”

Yeah, that was the problem.

“I’ll return to this again when the economy is good.”

Right. Can I short this now or do I have to wait until he forgets to return to it?

And this piece that most of the stories about Wikia Search’s close went with:

The only thing Wiki about Google’s Search Wiki is the name. A wiki, according to http://www.answers.com/topic/wiki, is

“A Web site that can be quickly edited by its visitors”

Search Wiki isn’t that. It’s a personalization feature that has as much to do with wikis as this blog (well, not exactly — this blog at least talks about wikis).

Wales says that he’s going to be

“refocusing resources on other Wikia.com properties, especially on Wikianswers.”

of which he said:

“Our Wikianswers Q&A site in particular has seen tremendous growth since it was re-launched in February, and we’ll be investing more of our time in it.”

OK, this part is false enough to make the rest of his post seem true by comparison.

“Tremendous growth?” He uses this chart from Quantcast: 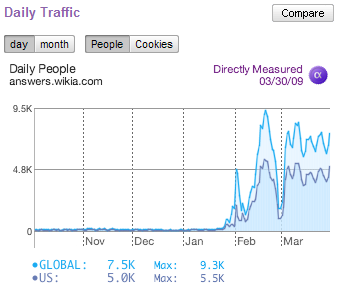 It’s very impressive until you look at it. Then you might notice: 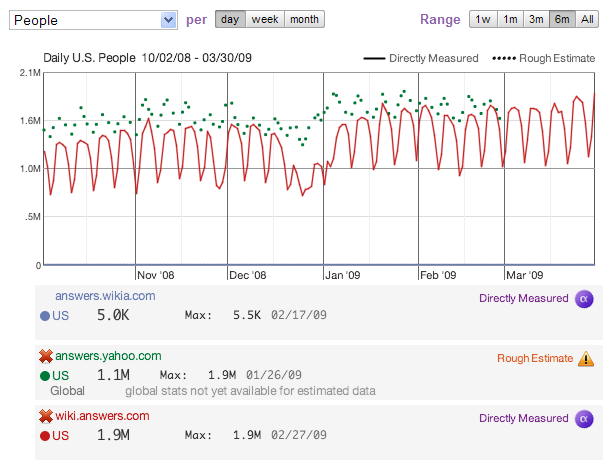 See the green dots? That’s their estimate of Yahoo! Answers. The red curve? That’s WikiAnswers (the real one). Appropriately, Wikia’s answer product is that blue line, flatlined at zero, a blip so small you can’t even see it at the scale needed to show the successful Q&A sites.

Wikia’s answer site brags of fewer than 15,000 “answered questions.” And that includes the thousands of acronyms that Angela Beesley lifted without attribution (and thus probably illegally) from Wikipedia.

This was one of my favorite lines from the imediaconnection interview, where Wales admits:

“We hired people from Wikipedia who have deep community expertise and understand how to help people function well in the wiki environment.”

So let’s put it all together. Wales and Beesley succeeded with Wikipedia but failed to profit off of it. So they took Wikipedia’s community leaders. They capitalized off the brand confusion. And years later, they still can’t get the pieces to fit. Now they’re trying again with WikiAnswers. Capitalize off the brand confusion. Seed it with some Wikipedia content. Try to make people think it’s successful when it clearly isn’t.

Can they really be focusing this whole Wikia venture on a Q&A site that’s going under a brand where somebody else owns the domain name, and the top spots on Google? One would think they’d have to be much smarter than this. Until one remembers that these are the same people that thought a user generated search site would take down Google.

« Managing Creativity » How to Write a Misleading Headline