” … the old South Indian Monkey Trap … depends on value rigidity for its effectiveness. The trap consists of a hollowed-out coconut chained to a stake. The coconut has some rice inside which can be grabbed through a small hole. The hole is big enough so that the monkey’s hand can go in, but too small for his fist with rice in it to come out. The monkey reaches in and is suddenly trapped—by nothing more than his own value rigidity. He can’t revalue the rice. He cannot see that freedom without rice is more valuable than capture with it.”

Robert Pirsig, Zen and the Art of Motorcycle Maintenance

Yes, Google Panda should make the Web better. Panda penalizes sites for having too many low quality pages, which will stop sites from throwing up millions of crap pages in the hope that a small percentage will rank. It’s like gmail’s spam filter blocking a good e-mail because too many other of that sender’s e-mail were deemed spam. 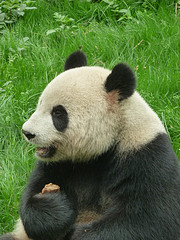 If that’s not bad enough, it seems to take more than one clean bill of health from Panda to escape the penalty box.

So in the long term, Google Panda incentivizes the behavior that Google wants. But in the short term, executives have a choice. They can try to get back some of the lost traffic. Or they can not only accept the losses but also inflict more short term pain on their sites in the hope that a few months down the line their successors will get out of the Panda penalty box.

If you’re thinking “you shouldn’t have gotten into this mess,” well, first of all, that’s often not a fair claim. I remain of the opinion that eHow is guilty of little more than aggressive pre-IPO PR. And Reference Answers was hit for spending over a million dollars a year licensing non-exclusive content from top publishers in order to serve their users.

eHow can claim (correctly, IMO) that they were unfairly put in the same bucket as spammers by interested parties (for more on this see Rich Skrenta, Praying for Spam and Google’s Decline: Myth or Fact).

But like the monkey in the South Indian trap, eHow must let go of whatever asset is holding it back. Economists talk a lot about sunk costs. Well, sunk assets is an important concept too. The food in the monkey’s hand is a sunk asset if the monkey can never eat it, but it’s against all of our instincts to let it go. Sometimes you have to mentally relinquish ownership of a lost or toxic asset so that you can move forward again.