Why the Tea Party Encourages & Terrifies Me 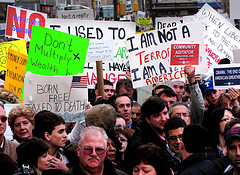 I originally loved everything I knew about the Tea Party movement. I thought we shared the same concerns, that it is the nature of all human organizations to expand, pursues its members’ self-interests, over-estimate their own virtue and their opponents’ vices, get increasingly corrupt, and increasingly take from and tyrannize others. I consider myself conservative because I’ve concluded that the organization that most threatens us is government. So I was initially quite happy about the Tea Party’s rise. And as I watched Glenn Beck last week speaking at CPAC, I was mesmerized for a while before starting to turn scared.

I think David Brooks sums it up well in today’s column comparing the Tea Party movement with the 60’s Left:

“But the core commonality is this: Members of both movements believe in what you might call mass innocence. Both movements are built on the assumption that the people are pure and virtuous and that evil is introduced into society by corrupt elites and rotten authority structures. “Man is born free, but he is everywhere in chains,” is how Rousseau put it.”

Brooks then defines conservatism in the following paragraph:

“For this reason, both the New Left and the Tea Party movement are radically anticonservative. Conservatism is built on the idea of original sin — on the assumption of human fallibility and uncertainty. To remedy our fallen condition, conservatives believe in civilization — in social structures, permanent institutions and just authorities, which embody the accumulated wisdom of the ages and structure individual longings.”

Brooks does a good job summing up my fear of populists and simplifiers, in business, politics, and elsewhere. I have a visceral reaction when people pronounce  simple solutions and expect everybody to just say “wow,” when they themselves haven’t first seriously learning and considered the accumulated wisdom.

Life is complicated. Individuals and organizations have their virtues and their weaknesses. I originally supported the Tea Party movement because I think Barack Obama has too much faith in government, and is overly empowering it at the expense of the individual. I fear the Tea Party is a strong overreaction the other way.

I think both sides are guilty of over-emphasizing the purity of those they wish to empower (government or individuals) while projecting all the evil onto the other side.

I’m thankful that the United States, both legally and culturally, has a system of checks and balances that is phenomenally conservative and resistant to sudden change. I hope it’s strengthened by the current clash of opposing populists.

I think it’s safe to share my political views because they match my managerial views. I think managers manage best when they manage least, when they help guide and empower their people to great achievements. Much of management is patience and focus, considering all sides, saying no to impulsive ideas, and making sure today’s sexy new idea incubates for a while before distracting the company from following through on yesterday’s plan. If you hate my politics, you’ll hate my management philosophies as well, so my risk in discussing politics to make my points is limited. And whatever your views are, I’d love to hear them. Even if that view is that I should never write about politics again.

Leave a Reply to A Passionate No | Managing Greatness Cancel reply