We’ve already been on the buying end of acquisitions ranging from the wildly successful (WikiAnswers) to the unsuccessful (Brainboost) to the aborted (Dictionary.com). Being on the receiving end has exposed me to a very different series of enlightening experiences. 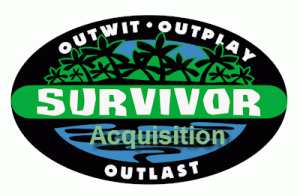 We’re currently in Survivor Phase. The acquisition has been completed but the new organizational chart has yet to be set. To be clear, most people’s efforts today are focused on work, particularly in determining our goals and setting out to accomplish them. And yet in many cases the work takes place within a larger subtext of self-promotion, jockeying for position, and the occasional backstabbing.

There are some benefits the company gets from this audition period, including:

However there are also downsides, potentially including:

For the acquiring company, here are some key steps to take:

1. Decide what your main goal for the transition is

Most specifically, which of these is your primary goal:

In either case you want to learn all you can about the team, the technology, the processes, etc. But if you’re primarily focused on Goal #2 you’re unlikely to succeed particularly well on Goal #1. So start by deciding what your primary goal is.

The following steps assume that you’ve chosen Goal #1 as your primary goal.

2. Learn about your people

Obviously watching your people perform is an important step in evaluating them, but be careful about the following potential sources of error:

If you want to build a successful team you’re going to need to talk to the team members and get their opinions of each other. Yes, you need to filter for bias. People are jockeying for position. Even those that have already booked passage off the island are biased by how much they like and respect their teammates. But talk to enough people, with the proper level of skepticism and caution, and you should get a good idea of which people most help the company. Make sure you’re talking to the rank & file and not just to managers. The nature of organizations is that subordinates understand their managers far better than managers understand their subordinates. For each person, pay most attention to the opinions of people who work closely with him or her.

This part is a two-way street. As you hone in on who you want, make sure it’s mutual. You may want to keep your cards close to your vest and announce them to everybody all at once, but that’s likely a recipe for failure. Don’t forget that:

This period can be traumatic and dangerous. The worst part is that some of your team members will feel they’re playing a zero-sum game against each other. You want your team members’ interests and desires to be aligned, so they’re focused on working together to build something great. You’d like to minimize the days spent trying to throw each other off the island.

If you’re in an employee of a company that just got acquired, here’s some advice:

The period between when an acquisition is finalized and the new organization chart is set can be both critical and traumatic. If you’re on the acquiring side, make sure building the ideal team is your primary focus, and that you’re moving forward quickly and intelligently to get the right team in place. Make sure you’re talking to the rank & file and not just to management to understand who really contributes what.

If you’re an employee whose company was acquired, consider how the landscape may be changing and where you may best fit in. Make your case. Be aware of how you’re affecting others. And take a deep breath and stand tall. This may be an opportunity to find the role where you can best serve the company and find happiness and fulfillment.

To sum it up, an acquisition is generally only as valuable as the team that will be moving it forward. Whether you just bought a company or are a member of a company that was just bought, do what you can to use this opportunity to get a great team in place.

Postscript: I’ve received feedback that I’ve exaggerated the amount of politics and positioning going on, whereas in fact most people are really just focused on doing their jobs and working productively with their teammates. I accept that. It’s the exceptions that stand out. Given how much tension in the air, the amount of teamwork and goodwill is actually quite impressive.