In Search of UGC Excellence

I happened to pick up my (nearly) 30-year-old copy of In Search of Excellence while preparing my PubCon presentation on High Quality UGC. 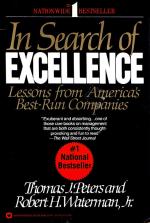 A few points stood out:

You can reject In Search of Excellence’s argument that most businesses should focus more on people and their need for meaning and excellence. But if you’re running a community site you should probably give their arguments your full attention. You can’t use monetary or authoritarian management techniques. If you’re running a community site, you need to focus on giving your people the non-monetary rewards they need, such as respect, appreciation, and the opportunities to help others and to pursue excellence.