[This post is part of a 4 part series on the key tensions in growing a high quality community-generated content site. It was presented at PubCon, Las Vegas, 2011.] 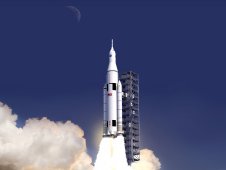 Don’t worry about using scalable practices to get off the ground. Very simple example in the blog world is 8 friends who agreed to interact with and promote each other’s content. Does it scale? Not really. But it’s a great way to start.

You have to get off the ground in a high quality fashion. It’s an investment. Don’t expect to break even yet. Ask your friends and family to help. Hire people. Don’t worry that it doesn’t scale, it doesn’t have to yet.

I lied, it’s not like rocket science. One key difference is that if you’re sending a rocket to the moon you better have all the launch details exactly right. You can’t just say “well, let’s see if we can break through the atmosphere, and then we’ll figure out where we want to go next.”

With a community site you need to make sure you’re pushing it in the right direction. But you’re just kidding yourself if you try to plan too precisely. Try to get the site live quickly, and then listen to your users and respond to their needs. Don’t delay launch because you’re trying to get it exactly right.

When a community site starts, you want to try to use every user contribution. It’s worth putting effort into fixing low quality contributions. When the site gets bigger, the value of each mediocre contribution is lower, but the cost of fixing it hasn’t changed, and you may decide to be more aggressive about just deleting contributions that aren’t good enough for the site. You always have to ask “Is this worth it now?” So when you’re starting, don’t say “we shouldn’t do this, it won’t scale when we get big.” If it’s worth it now, do it. And then when you grow, don’t say “but we grew the site by spending a lot of time fixing low quality contributions.” OK, that’s how you got here. But now that the site scaled, is it worth it now?

There’s another way the “Does it scale” question can trip you up. You may have a model that scales, let’s say one paid editor per 10,000 community members. Then as the community grows, you panic. “If we get to 5 million users we’ll need 50 paid editors!” OK, great! If you did the math that the value created by X members more than covers the expense of a paid moderator, then you should be thrilled. Of course you need to check and make sure the model is still working. But don’t drop the model because you’re afraid that if you have a billion members you’re going to need ten thousand moderators.

Getting off the ground requires significant investment. Don’t worry that your initial strategies don’t scale. On the other side, when you get big, don’t say “we should continue doing this because we used to do this.” Do what’s right for the stage that your community is at. Yes, you need a business model that scales. But at your initial stages be prepared to do things that don’t scale, that use your friends and family, and that lose money. Don’t limit yourself by only looking for techniques that scale.

Also in this series:

« Brainfluence: Persuading with Neuromarketing » Teddy Roosevelt’s Citizenship in a Republic