SMX Toronto was excellent. Here’s the best of the best: 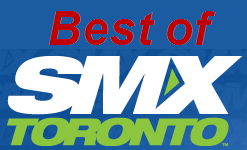 Got more? Help me out by Tweeting me at @GilR with more nominations (and corrections). Thanx!

For more in the series, see: